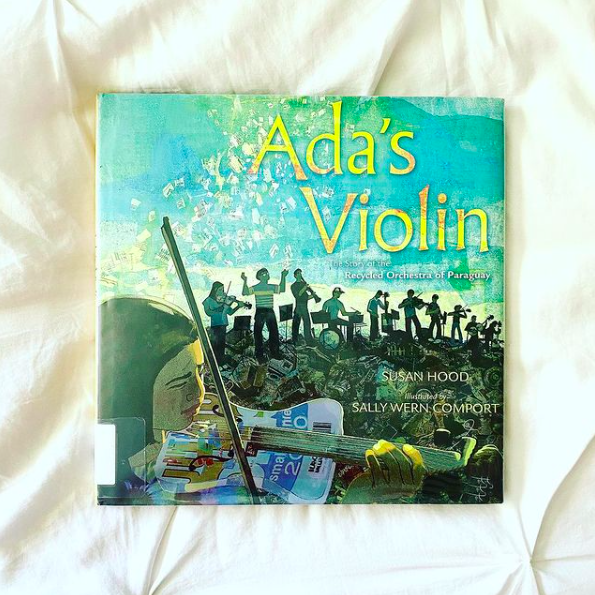 My kids and I first heard the story of Los Reciclados (The Recycled Orchestra) on the @biglifejournal podcast. It’s a fascinating story about a group of kids from Cateura, Paraguay who created musical instruments from recycled trash, and went on to perform concerts all over the world.
This book is a more personalized lens to that story, Ada Rios grew up with the trash heap as her backyard. Her family and friends searched through the trash, earning 5 cents for a pound of cardboard, 10 cents for a pound of plastic.
At age 11, Ada saw a sign for guitar, cello, and violin lessons being taught. She longed to learn music, and went to the first class, only to find many others had the same ideas and there was not nearly enough instruments to go around. Their teacher, Senor Chavez helped the kids fashion instruments from recycled garbage; old X-ray film became a drumhead, oil drums became cellos, water pipes became flutes, and packing crates became guitars.
Senor Chavez insisted on hard work, commitment, and consistency, practices were strict and kids played outside, even in 100-degree heat. News of their orchestra spread and other famous bands helped give the group visibility.
An inspiring story about art, creativity, perseverance, and pride. Highly recommend listening to the Big Life Kids podcast episode to complement this story.
Ages 4-8+
Amazon - Bookshop
Labels: countries around the world music orchestra perseverance success story