This was a powerful read! Based on the author’s own life and experience, Tanitoluwa (Tani) Adewumi was born in Nigeria, and fled to the United States at 6-years old after his family was targeted by the terrorist group, Boko Haram.

His family fortunately was able to stay together, and moved into a homeless shelter in New York City. Tani liked much of his life in America, but missed many things about his old life, including having a home of their own. 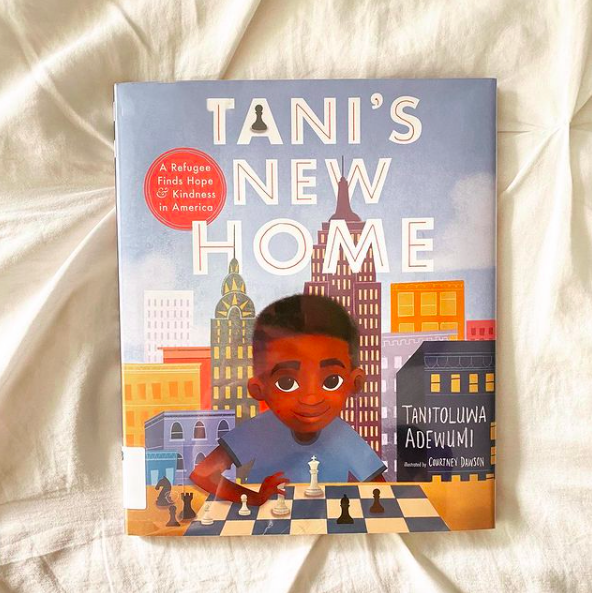 At school, Tani learned how to play chess, and discovered he was quite good at it. When interested in joining the chess team, he was disheartened to learn it had a fee, which his family was unable to pay. Seeing the determination and passion in her sons eyes, Tani’s mom was able to help secure a scholarship for Tani after his coach learned they were homeless.
He practiced every day, first on a paper board with cut out paper pieces that he and his brother created, and then with real chess pieces. Hard work and dedication to his game paid off, and at age 8, Tani became the New York chess champion!
An article ran in the paper sharing Tani’s story; a homeless refugee turned chess champion! People read the article and wanted to help. A GoFundMe page was established to help Tani and his family, some gave $5 or $10, one stranger even gave them a place to live!
Eager to give back to help other kids like himself, Tani and his family ended up donating ALL of the money raised in support to help other kids in need learn how to play chess! This book really resonated with my kids, who I’ve come to learn often associate homelessness with adults. Reading Tani’s story was enlightening as they began to wrap their little minds around the concepts of fleeing your comfortable home, and ending up in a new country, poor and homeless, and attempting to comprehend what that life might look like. An inspiring story about overcoming obstacles, hope, and kindness.
Amazon - Bookshop
Labels: African American history non-fiction non-fiction picture book refugee story