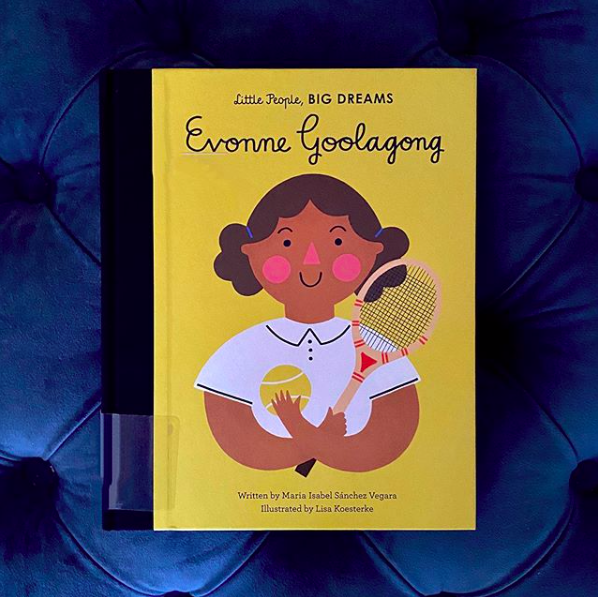 Love this kid-friendly biography series; Little People, Big Dreams, for their short + sweet, digestible but informative accounts on important figures in history.
Have you ever heard of Evonne Goolagong? Well, I hadn’t until this very book. Evonne’s was born in Australia, a member of the Indigenous Wiradjuri people. She grew up in a large family, the 3rd of 8 kids. As a child, she discovered tennis and dreamed of one day going to England to watch Wimbledon. But tennis lessons were expensive, and not a privilege Indigenous girls were privy to.
She didn’t let that stop her, playing after hours and using found materials for a ball and racket. Evonne eventually caught the eye of a tennis coach who made practice facilities available to her and eventually moved her to Sydney to train. Her growth mindset helped her appreciate her wins and learn from her losses. Eventually, she did make it to Wimbledon; and won! And then, 9 years later, she won again, and became the first mother to win the tournament in over 60 years! Very cool! After retirement she continued to inspire and support young Indigenous children to try tennis. An inspiring story and a window into an exceptional woman’s life. I’m glad to learn about Evonne for the first time, alongside my kids.
Amazon - Bookshop
Labels: biography female empowerment strong women tennis