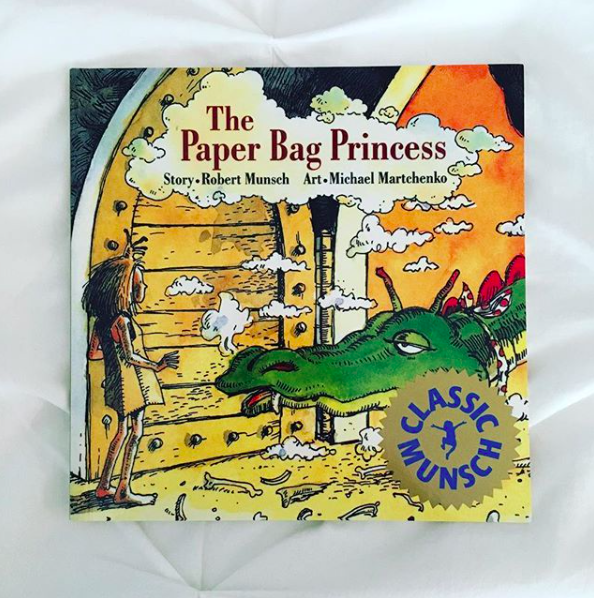 Introduced this classic book to my kiddos today. A terrific book, originally published in 1980 that was lightyears ahead of its time! A story that values a princess’ quality of character above the glitter and glamour of actually being a princess.

In case you’re not familiar, Princess Elizabeth is slated to marry Prince Ronald. She’s lived a charmed life in a beautiful castle until a fire-breathing dragon smashes her castle, burns all her clothes, and carries off Prince Ronald.

What a dilemma! Ever resourceful, Princess Elizabeth picks herself up, fashions a dress from a paper bag, and sets off to defeat the dragon and rescue Ronald. Using her clever intellect and wits, Elizabeth manages to pacify the dragon and save Ronald from harm- albeit coveted with ashes and soot given her recent escapades defeating dragons. Instead of being received with delight and appreciative thanks, Prince Ronald is disgusted by her appearance, admonishing Elizabeth for her tangled hair and dirty frock, instructing her to “come back when you are dressed like a real princess!”

Say what?! Elizabeth cannot believe her ears! Rejecting his betrothal and royal decorum, she proclaims him a bum and proceeds onto her next adventure into the sunset- alone and independent, not to be tied down by a man who doesn’t appreciate a princess for her true worth. Disney could learn a thing or two from Robert Munsch!