We are just beginning to navigate the waters of allowance, saving, and giving in our home.  Recently, our precocious five year old received a moon jar for Christmas.  A moon jar, if you weren't aware is a three-sided piggy bank, with separate compartments meant for saving, spending, and sharing.  Our daughter's moon jar has inspired many conversations about the values of saving to spend, saving to save, and saving to give. While I would say at this age and stage, she is definitely most interested in accruing more toys, it has been a helpful foundation to begin talking about how we handle money. 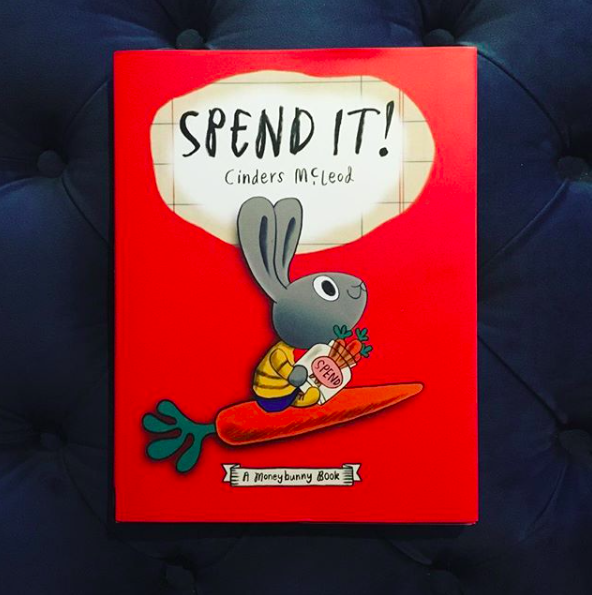 As such, I love it when a book can help communicate a message you're already talking about with your kids.  Spend It by Cinders McLeod is the tale of Sonny the bunny, who has recently been given a weekly allowance by his parents.  Every Saturday, Sonny receives three new carrots (after all, carrots are the currency in Bunneyland).

However, it turns out, despite his parents best efforts, Sonny isn't a saver in the slightest.  On the contrary, his problem is...he wants to buy everything!  Pogo sticks, toy rockets, bouncy houses!  His allowance, rather than cultivating an awareness of savings and responsibility is fueling Sonny's greed for more stuff!  Sonny's mom tries to explain that while an allowance is currency, it doesn't allow for constant spending. She oh-so-patiently explains that if he really wants to buy something, he will have to count his carrots and carefully choose an item that he can afford with the carrots he has, and choosing can be hard.

Spend It a humorous spin on the topics of saving, spending, and wanting everything! Reading it with your child is a great gateway discussion about money. The clever drawings and engaging text help illustrate that money is finite and doesn't go on forever.  This story is a blend of Betty Bunny Wants Everything meets the whimsical text of Oliver Jeffers.  A great conversation starter for that kiddo who wants an allowance!
Labels: ages 5-10 allowance fiction lessons money picture book